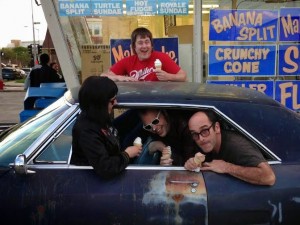 Ramma Lamma is a Milwaukee Rock n Roll supergroup consisting of members of Bleed, The Chinese Telephones, The Flips and The Kill-a-watts. They have been around a few years now. They have a fantastic new album out called Ice Cream. It’s a rock n roll party record with various styles of 1970’s Rock n Roll such as Glam/Pub Rock/Bubblegum/Boogie Woogie. They only want to have a Rock n Roll party with you. So get loose and kick out the jams with Ramma Lamma.

Bring a little weekend fun to your weeknight – join us this Tuesday, September 9th for a performance and live radio show with Ramma Lamma, at MSOE’s Todd Wehr Conference Center; 1047 N. Broadway. 5:30pm doors, 6pm live radio segment + show. If you can’t join us at Todd Wehr, just tune in at WMSE.org, 91.7 FM at the 6 o’clock hour.