FILED UNDER:: Short And Sweet (Q&A's)

Seattle pop band Tacocat recently welcomed their fourth full-length and first release for the revered Sub Pop record label. And while their brand of pop is gloriously upbeat and sing-along-intended, it’s also gloriously draped in elements of punk and grunge and dares to douse its lyrics in blunt, IRL context; there are no pop fantasies, here – what the listener gets is a super fun (but super real) batch of songs. Tacocat is on tour for This Mess Is A Place right now and make a stop in Milwaukee tonight for a show at the Cactus Club. Lead vocalist and songwriter Emily Nokes talked to WMSE about making the leap from Hardly Art to Sub Pop, Seattle life and getting dark while still dorking out.

[Your] local radio station KEXP loves you and calls you “hometown heroes”.  Is a sense of community and connection what keeps you in Seattle (as opposed to moving to Nashville, LA or NYC)?

There’s definitely a sense of community and connection in Seattle—we love and helped build the current music scene here! It’s not like we haven’t thought about moving before though—the gentrification got pretty intense here for a while, and the pricing out of artists/watching our familiar city get torn down has been really hard. But that said, the people and artists and community here just can’t be beat. And when tour is so much a part of our lives, it just never made sense to pick up and find a new home base when we’re gone so much anyway.

For this new record, you’ve climbed from Hardly Art to Sub Pop. What’s your ultimate Sub Pop artist + release that makes you geek, thinking you’re label mates with this artist?

Phew that’s a tough one. I mean, besides Cat Butt? 😉

You chose to work with Erik Blood as a producer again (who you worked with on 2016’s Lost Time); how does Blood get you to sound the way you’re envisioning when you’re in the pre-recording stage?

He’s a magician! We know each other pretty well at this point, so there’s a lot of trust there, and we like his ideas. He and I like to dork out on harmonies, he and Eric like to dork out on guitar sounds. I think everyone has a mutual appreciation that just makes the fine-tuning process really collaborative. We come in with a structure and he fills in the blanks, or blanks we didn’t even know we had! 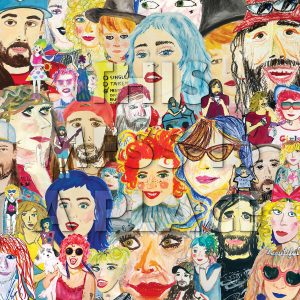 You each contributed art to the album cover to create quite an amazing collage – did any of you take art in school or is art mainly a therapeutic (or simply a fun) pastime?

Lelah (our dummer) and I actually met in art school! We both went for graphic design. One of my other jobs is actually graphic design. We designed everything we’ve ever made. For this one, as well as for the cover of Lost Time) we had Bree and Eric contribute drawings as well. We LOVE how this one turned out!

Speaking of therapeutic, while This Mess Is A Place is sonically pop, it’s really quite heavy.  What is the song that hits the hardest for you, personally?

Right now it’s “New World.” That song really means a lot to me. It’s so fun to play, and because we just made a music video for it it’s really been stuck in my brain again after listening to it like 50 times in three days, haha. “Crystal Ball” is also a really hard-hitting one for me. Making this album in this political climate was a real labor of love and a true exercise in crawling out of some dark feelings.

Tacocat’s been a band for over ten years! Going into the studio for This Mess Is A Place, was the experience noticeably easier? Do you now feel that you can just relax and enjoy the work of being in a band?

It’s easier in some ways, like we know the drill and have been familiarized with the nuts and bolts of recording so much at this point that we know what to expect. But honestly, recording will never not feel insanely stressful and scary, haha, just due to self-imposed expectations and the general feeling of being unprepared (which is how it always feels no matter what—sometimes legitimately, like the lyrics aren’t actually finished, sometimes more “imposter syndrome-y” like, should I made this part different? Should I add something here? Should this be something else entirely??? What am I doing!) haha. The relaxation part comes when it’s done and we can finally listen to it outside of the studio. Then it becomes real and my heart rate can go down again 😉

Listen to Tacocat’s This Mess Is A Place HERE and find info on their show at the Cactus Club in Milwaukee tonight, HERE.