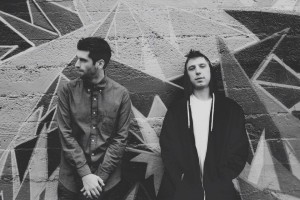 Harrison Mills (aka “Catacombkid”) and Clayton Knight (“BeachesBeaches”) took a school-based bond (they attended the same university) and turned it into a musical project, working together cohesively as producers to, in turn, produce a sound together that is a gauzy dreamscape of melody and beat, working their Pacific Northwest environment into songs filled with wistful downbeats and the occasional sunburst of a hook. Vocals are manipulated tastefully and the bass pushes it all forward to give that dreaminess enough bite to translate well from headphones to stage-side. Over the past couple of years, the duo quickly made a name for themselves in their hometown of Seattle and are now busy stretching their legs through a recent co-tour with Pretty Lights and plans to continue to ride the wave of buzz they’ve created since the release of their latest EP, My Friends Never Die. Knight took the time to chat before Odesza visits Milwaukee tonight for a show at the Miramar Theatre.

Seattle Weekly named Odesza one of the city’s “most outstanding musical artists of the year” and the Hype Machine played the heck out of your single — are you basking or hauling ass even more regarding that kind of attention?

That kind of press always gives us more incentive to work harder. We believe that most of the positive attention we have received is due to our work ethic and the amount of time and effort we put into what we do. There is no rest for the weary and taking time off would just be a waste of a great opportunity.

The initial buzz has definitely died down, but this seems to happen with most new releases. We still hear from people just discovering our new EP that they really enjoy it. The play counts and downloads keep steadily increasing, so overall, we would have to say it’s still doing well…

Tell me about touring with Pretty Lights and all things following that new EP last fall.

It was such an honor to have the opportunity to play before one of our favorite artists. Seeing the professionalism and the amount of time and effort that goes into a show of that magnitude really was eye-opening. We learned so much from those guys and hope to do more in the future.

As separate producers working together, what do each of you bring to your combined sound as Odesza?

We come from somewhat separate backgrounds in music. I (Clayton) come from a more dance/pop sound while Harrison was always more into the down-tempo styles. Combining the two sounds seems to work really well. The workflow is smooth and we are on much of the same page when it comes to taking a track in a certain direction. We try to split much of the work up evenly. I come from a more classically-trained background and really like to develop the harmonies and melodies while Harrison has a really good ear for hearing what works and doesn’t work for a certain track.

Any recording secrets? Many reviewers hail your analog sound style.

No real secrets, but we try to focus on the details of each individual sound as much as possible. Layering sounds is a huge part of what we do and being able to know what works with what is extremely important. We are really attracted to the warmth and overall tone of old recordings as well as analog synthesis and try to capture that in much of the music we make.