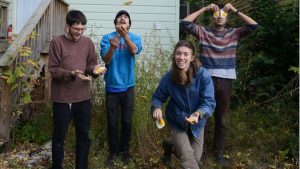 Palm’s pop rock is all about the mental calisthenics as it revels in oddball time signatures and rollicking instrumentation, making their traditional rock setup sound flat-out synth-pop at times. It might be a brain crunch to listen to, yet it’s exhiliarating in its creativity; Palm is rock wizardy at it’s finest and the Philly quartet definitely has it down to a fun-spirited science by their second album.

NPR wrote of Rock Island, “Palm has pulled off an impressive trick: Rock Island is its most accessible release yet, but never sacrifices its beloved experimental edge. It’s a testament to the band’s years of collaboration and ceaseless desire to approach rock songwriting and performance from untested angles. The band may ignore most rules of rock and roll, but one maxim stays intact: This whole thing is supposed to be fun.”

You just hit the road…how much are you all missing home (Philly) right now?

Normally when you embark on a long tour the novelty begins to wear around three weeks in … we are on day five right now so everything is still feeling great. We are happy to be with each other.

What’s been your favorite show of the tour so far?

Our record release show in NYC was intimidating and fun. We played with Sammus and Melkbelly.

One of our DJs at WMSE also graduated from Bard College and speaks highly of her experience. What was Bard like for you all? How did it shape you as a musicians?

Bard was cool. It’s a really beautiful place and a lot of people were keen on music there. There were shows happening all the time and a lot of bands passing through so it was great for starting out.

Your time signature changes are definitely a calling card – can you describe what it feels like to play a show and have all your changes go perfectly? Any epic fails on keeping things together (that you can laugh at, now)?

It’s true that our music has a lot of parts but we’re pretty used to them because we wrote ’em and we practice a lot. So when things go perfectly it’s not necessarily any different than it might be for less complicated music. Putting on an engaging/energetic set and generally sounding good is hard regardless of the style of music I guess. I don’t know that any particular times where we bombed or something comes to mind but we mess up and fall apart plenty. In a way, our style of music can actually help cover up the moments when we’re less than together.

Some of the sounds on your records sounds like synths; how do you manipulate the two guitars + bass to fill in those tones? Any special pedals or is it all just MIDI controllers?

Some of the guitar-playing on the record was played through a MIDI pickup, and the drums were also used to track MIDI by way of triggers. So we’ve been using our instruments as MIDI controllers to punch in samples of our choosing.

Find Palm at the Cactus Club tonight, alongside Dorth Nakota and Spirit of the Beehive . Find Palm’s music and info at Bandcamp and on Facebook