Voix de Eaux Claires: Words On and From the Inaugural Festival 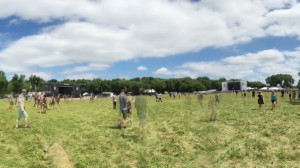 About 22,000 music fans gathered at the 20-acre Foster Farms in Eau Claire, Wisconsin last Friday and Saturday and the air was expectant, giddy and mellow all at once. The event? Eaux Claires, the debut festival put together primarily by Eau Claire resident (and musician), Justin Vernon [Bon Iver, Volcano Choir, Shouting Matches] along with Aaron Dessner [the National], which welcomed Eau Claire, Wisconsin and national acts as well as artists, pairing up folk, hip hop, metal and pop without any concern that it would not make sense. There was just a trust that it would make sense. In the Midwest, the Eaux Claires festival had been talked about with quite a bit of anticipation in recent months, to say the least.

The heat added to that initial mellow feeling from day one and out of the thousands of people that gathered to mill between two facing stages  in a field next to the beautiful Chippewa River and clamber through a wooded, lit path and up a steep hill to another open field dotted with geodesic domes and another huge stage, the feeling was like a big family reunion. No one was in a rush, everyone was happy to take their time with everyone. The festival’s Creative Director Michael Brown had called it “”a confluence of 22,000 beating hearts.”

Day One: the scent of BBQ floated through the air as the sun radiated, lighting the field up and giving off the sounds of bugs and smells of grasses and field flowers. The line to get in, under the giant yarn bomb by Minneapolis artist, HOTTEA, was slowly but surely moving and Hiss Golden Messenger was setting up to play. Those who just gained entry are milling about, but as soon as the music starts from the “Flambeaux” stage, the millers are magnetized to that stage. So it begins.

People were locked in, always moving from stage to stage, sitting on blankets, standing close to the stage, waving signs for their favorites. The sincere hushed presence of Field Report is on the “upstairs”, hilltop stage – “The Dells of the St. Coix” – and word of mouth reaches people who didn’t catch the show that it was “unbelievable”. Black/avant garde metal band, Liturgy follows the Field Report set, but this doesn’t seem out of place in any regard.

The  weekend was already in full play. The rest of the afternoon and evening, included phenomenal sets from country crooner Sturgill Simpson, Minneapolis hip hop collective Doomtree, the legendary and dapper Blind Boys of Alabama, Spoon, The National (with an appearance from Vernon on “Slow Show”) and Lizzo, whose inspiring performance was one of the highlights of the day. Festival MVP Grandma Sparrow held down the “Piddle Tractor Family Zone” from 2:15pm – 8pm, took a break, then headed up to play “The Banks of the St. Coix”, a geodesic dome [designed by  Michael Brown], in which Jon Mueller just performed his debut of Initiation in a swelltering, “hallucinatory” atmosphere. Anyone who was present for Mueller and Initiation said the heat was well worth it and almost added the effect with a lone dancer weaving about in a dreamlike state. 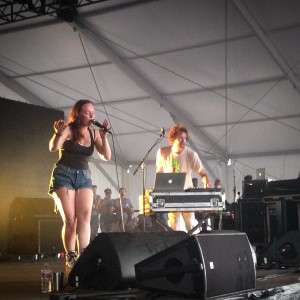 Day Two: used to the heat and having braved a pretty gnarly storm the evening before (no camper wants to hear tornado sirens while tent camping), the festival goers surprisingly looked even more in good spirits as the humidity had lifted a tiny bit and the grounds dried out. Business as usual.

Phil Cook graced the “Lake Eaux Lune” stage, debuting new material from a soon-to-be-released album, Southland Mission. Eaux Claires was in full-swing of testing out the spirit of collaboration since Friday (Justin Vernon sitting in with the National, i.e.), but the spirit was more involved on Saturday. Amy Ray (Indigo Girls) and Amelia Meath (Sylvan Esso) joined Cook up on stage and the crowd, not expecting these collaborations, cheered and clapped like their old friends had just walked on stage. S. Carey, in that same spirit, was deep in work with the Eau Claire Jazz Ensemble before the festival to enlist them as his able backing band. It was a nod to his Eau Claire music roots and that nod sounded good with Carey’s subdued and elegant songs.

While Carey played, Milwaukee guitarist Chris Rosenau held a huge line of people to get in to see his dome performance, audience headphones aiding in highlighting the guitar trickery his live solo sets employ, giving a perfect surround-sound effect.  Shortly after, Colin Stetson blew the roof off the “upstairs” stage with his circular breathing + contact mic percussion + array of saxophones and Eau Claire’s/Minneapolis’ Aero Flynn gave a chilling and inspiring performance that was the calm before the Melt Banana storm. Meanwhile, Charles Bradley set off the feel-good vibe for the entire “downstairs” of the festival, mid-afternoon. The soulful crooner was a vision in purple and gave it his all, even in the baking heat.

The rest of the warm afternoon was an outpouring of appreciation from the musicians involved as they could feel the weekend slipping through their fingers. The crowds were getting a bit sentimental, too and mirrored that appreciation. At 6 p.m., Monica Martin, singer of Baraboo’s Phox, took the stage with her band to a crowd of at least 2,0000 and sincerely stated, “It’s the best festival we’ve ever played”. Sylvan Esso followed, but turned up the heat and energy – the North Carolina duo ripped out all the stops and had the audience moving and sweating, security throwing bottles of water into the crowd and eventually, just opening the bottles and splashing the water, itself, onto the crowd. By the time the sun went down, and Sufjan was serenading the crowd down the hill, everyone was winding down, pretty peaceful and beginning to station themselves out on blankets on the grass to catch the final show opposite the Sufjan stage (Bon Iver), much like a neighborhood gathering for a giant fireworks blowout.

The end of the festival, although it held a great deal of anticipation for Bon Iver’s set, also held a great deal of space and time for culmination of that whole collaborative air. Michael Perry (Eau Claire-based author and festival emcee) wrote for VolumeOne before the festival – “Music in the Chippewa Valley. You never know what it might lead to”. He talked about the magic of Eau Claire and the idea of musical “confluence” that the city was actively pursuing.

Bon Iver’s set, which was the anticipated set of the weekend for many, held up to the anticipation, as Vernon, behind his synths + guitar combo, kept his set varied and his collaborations on full display, employing the lovely voices of The Staves for backing him on the layered choral parts of his set from For Emma, Forever Ago. Josh Scott of Aero Flynn joined Vernon on vocals and guitar for a bit, Aaron and Bryce Dessner, Colin Stetson, yMusic and the No BS! Brass Band also joined on much of the set and before sealing and stamping that set, treated the crowd to two brand new songs, before closing out with an acoustic, old-school version of “Skinny Love.”

Shortly after its last patron left the grounds, the festival wrote on its blog, “Many deep frozen months ago, when we released a chattering, stuttering, video clip haunted by a disrupted, distorted narrator invoking swampy swamps and exploding clover blooms and twitching larvae—we weren’t sure. When we offered tickets with no details—we weren’t sure. When we followed country with rap, when we spoke of yarn in the sky and confession and mystery rainbow trails—we weren’t sure. And then we started telling ourselves something: Trust the audience. Trust. The audience.”

That simple trust is what made the weekend. The feedback from the musicians involved, alone, is enough to say this debut festival was a success.

Three of those musicians and one of those artists took the time to talk about their Eaux Claires experience, their Eau Claire (and Wisconsin) experience and what they have on the horizon. Listen below to interviews with Poliça, Chris Rosenau, Phil Cook and Grandma Sparrow’s set designer, Carson Efird.